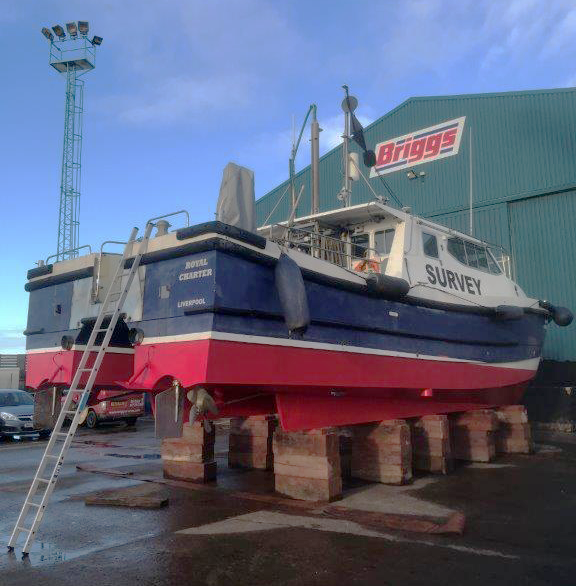 Due to a failed GBLO cooler, the oil from the gearbox had leaked into the seawater overboard discharge. The boat was on passage travelling at 16 knots. The oil leak was not noticeable due to the vessels generated wake; subsequently, the gearbox ran dry and seized in the forward gear mechanism.

The boat returned to the marine base. On inspection, the gearbox was declared unfit for service, and the engine gearbox was removed. The damaged gearbox was shipped to MIT’s northern service centre, where a survey was carried out to establish the extent of the damage.

A survey boat has no redundancy, so the vessel needed to be back in operation as soon as possible. MIT was asked to supply a new gearbox. Average gearbox lead times are up to 20 weeks; however, MIT was able to source, prepare, paint and deliver the gearbox within ten days!

The vessel was out of service for a total of 20 working days which equates to only 25% of the expected downtime to repair the gearbox!

The effort of MIT staff at both their northern and service centres aided the vessel’s return to service, ensuring the necessary river and dock system survey processes were reinstated, providing the safe transit of sea freight ferries and passenger ships into the Ports of Liverpool and Manchester.

MIT is not only the provider of OEM parts but is integral in the provision and repair of Twin Disc Gearboxes which are fitted to Royal Charter and other boats supported by the maintenance team at the Marine Base in Liverpool. Lead times for spares and repair are known to be up to 16 weeks, with lead times for gearboxes at 20-22 weeks. To turn around an order and delivery of a gearbox within 10 days is tantamount to going the extra mile. Based on experience and knowledge of MG and MGX gearboxes MIT remain the primary service provider. MIT provide value for money when supporting Briggs Marine Contractors with the maintenance and repairs of the gearboxes and the associated control systems.  David Coleman, Technical Manager – Briggs Marine